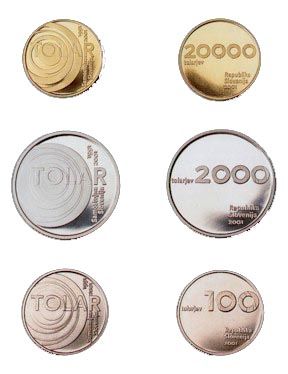 On the 10th Anniversary of the Republic of Slovenia and the Tolar – the Currency of the Independent Republic of Slovenia, the Republic of Slovenia hereby issues the anniversary coins. Their form conforms to the “heads and tails” principle. The obverse (“heads” – the message of an issuer) can symbolically represent annual rings by its circles and illustrate the growth, the vitality and the greater and greater power of the independent Slovenian currency, as well as representing the undulation of water in a fountain into which a coin has been thrown. The letter “R” to the right hand side sensibly complements the “Independent Slovenia” inscription and signifies the state order acronym, introduced together with the introduction of the independent currency. The reverse (“tails”) shows the nominal value, the name of the coin issuer and the year of the issue.