On occasion of the 2002 FIFA cup Korea/Japan 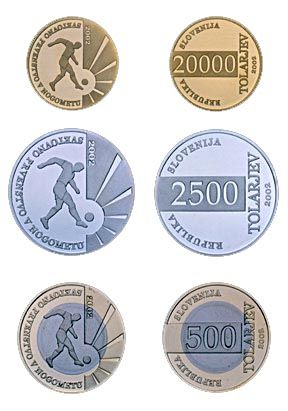 On the occasion of the 2002 FIFA World Cup in Korea/Japan, the Republic of Slovenia hereby issues three commemorative coins (a gold coin, a silver coin and a coin for ordinary circulation). The coins are issued to praise the success of the Slovenian National Football Team, of its coach and of the Slovenian Football Association. They also express the broad Slovenian support of and adherence to sports and sports competitions in general.

The participation of the Slovenian National Football Team in the FIFA European Cup two years ago was a surprise worldwide. The qualification of the Slovenian National Football Team among the thirty-two world national teams to compete in the forthcoming World Cup is, no doubt, a great success, given that national teams of some countries considered much stronger in football have not qualified. It will be a privilege and an honour to hear the Slovenian national anthem “Zdravljica” ("A Toast", a poem written by Slovenian greatest poet France Prešeren ) played upon the opening of the 2002 World Cup.

The achievements of the Slovenian National Team have substantially increased interest in football and have made it popular nation-wide. The so-called “football fairy tale” has triggered display of mass enthusiasm on the occasion of good achievements of the Slovenian National Team and has paved the way for the slogan “Slovenija gre naprej!” (Slovenia qualifies!).

The motif of the coin is based on the historical fact that the ball-kicking game was considered a symbol of the “rising sun” in China as early as at the beginning of the first century A.D. Depicted on the coin is the sun with sunrays on the horizon, a human shape representing a football player ready to kick, and a ball. The sun with its rays symbolically determines the venue of the World Cup in geographical sense, the five rays represent the five continents. The ball, the human being and the sun are the three elements which render three-dimensional perception possible.