50 years anniversary of the victory over nacism and fascism (1995) 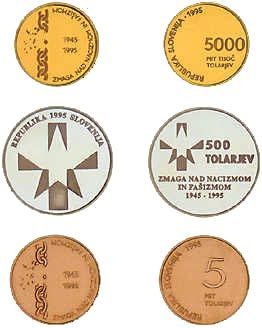 With the end of the Second world War, 1945 was a landmark year for all the nations and nationalities of Europe. The joint victory over Nazism and Fascism took a considerable toll on the victors, and the Slovenian nation was no exception. Many did not live to see the light of freedom, when the shackles of the previous years were thrown off, and when EQUALITY, JOY and RECONCILIATION could once again take their places among people.

See how the Slovenes have participated in WW II:

Looking back fifty years later, the question still arises as to whether such grave disagreements between people, and the blind ambition of politicians, are really necessary, turning conflicts and desires into bloodshed, the destruction of cities and homes of the innocent, and the severing of all ties between nations.

The anniversary of the end of the war perhaps presents an ideal opportunity to call for greater cooperation, understanding and reconciliation between peoples.

May the dove of peace herald the beauty of life, harmony and peace among nations!

May differences be resolved through understanding and tolerance!

May all the nations of the world join hands for a better tomorrow for all, when there will NOWHERE and NEVER MORE be WAR nor hatred, and when the children of the world will be free to experience the joy of youth and the happiness of us all!

See how far we succeed in that: Organisation of United Nations and Twenty years anniversary of Helsinki agreement

To mark the 50th anniversary of the victory over Nazism and Fascism, the Republic of Slovenia is issuing three commemorative coins: