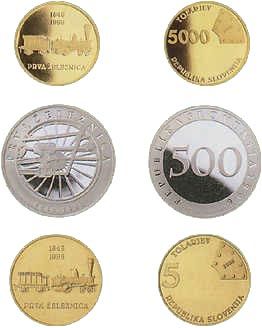 On June 2nd 1846 rail traffic ran for the first time on the territory now known as Slovenia. On this day a ceremonial train pulled by the locomotives names "Aussee" and "Drau" arrived at Celje. The arrival of that first train on Slovene territorry represented a turning point whose effects are still felt today.

The railway between Graz and Celje, which was a section of the line between Vienna and Trieste, was laid out as early as the year 1842. A 190 m long tunnel was constructed at Sentilj, and across the Valley of Pesnica a 649 m long viaduct was built. The latter was the longest construction on the entire railway line and was made of bricks only. Bridges were, in principle, made of wood. The longest bridge was the one across the Drava River in Maribor , rising 26.2 m above the river and being 190 m long. There were 13 railway stations set up between Graz and Celje. A steam locomotive drove over the Pesnica Viaduct for the first time on May 2, 1846. The railway line between Maribor and Graz was unofficially tested on May 15.

The railway is one of the few achievements of the industrial revolution which has not changed substantially up to the present day and, in spite of the rapid development of other means of transportation, still represents an indispensable element of the country´s economic progress.

To mark the 150th anniversary of the railway on the Slovene territory, the Republic of Slovenia hereby issues three commemorative coins: