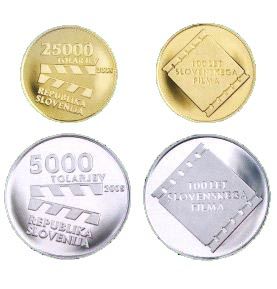 Film is one of the youngest forms of art and dates from the end of the 19th and beginning of the 20th century. The first films were silent: there was no sound or music. In December 1895, visitors in a Paris café saw the first pictures ever recorded on film, whereas in Slovenia, they were seen for the first time a year later. At that time, Slovenes did not lag behind other countries in film making. In 1905 Dr Karol Grossman made two documentary films that were only a few minutes long: Returning from Mass in Ljutomer and Ljutomer Fair. These were the first metres of Slovene film. In 1906 the film entitled In Our Garden was made, which is a record of family life. The films are kept at the Slovene Film Archive, which is part of the Archive of the Republic of Slovenia.

In the period between the World Wars, the first Slovene feature films were made: In Zlatorog’s Realm (Janko Ravnik, 1931) and Slopes of Triglav (Ferdo Delak, 1932). During this period, a number of film makers were active that became known for their documentary films. Among them were Veličan Bešter, Metod Badjura, Ivan Noč, Božidar Jakac and Janko Balantič. In the 1930s the first trained film maker, Marjan Foerster, began his career. Film making continued even during occupation in the Second World War. The most characteristic are a series of films with a common title Partisan Documents and the film Great Anti-Communist National Meeting in Kongresni Trg, Ljubljana 1944. After 1945, a film production company, Triglav Film, later renamed Viba Film, was founded in Slovenia, while film distribution was the responsibility of Vesna Film. In 1948 France Štiglic made the first Slovene sound feature film On Our Land. An increased production of Slovene feature films, short films, documentaries, promotional films, student films, experimental films and animated cartoons followed. On average, thirty films were made every year. Slovene films have competed at festivals in Slovenia and abroad – several of them have been awarded. After the declaration of Slovene independence, film production declined, but the situation improved in the mid-1990s with the founding of the Film Fund of the Republic of Slovenia. Feature film makers hold credit for a range of quality films that have placed Slovenia on the map of European and world film.

One Hundred Years of Slovene Film is not only an important cultural event for Slovenia and the preservation of Slovene film heritage; it also represents an important contribution to the film heritage of Europe and the world. For this reason the Republic of Slovenia has issued special coins with the motif of a clapper board, which symbolises the beginning and end of action in a film scene (on the obverse) and the motif of a film strip, which is gradually disappearing from modern cinematography, being replaced with a digital record (on the reverse).