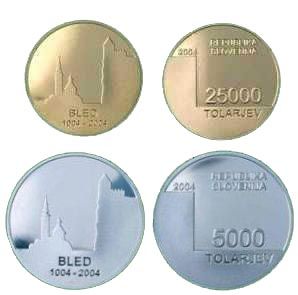 “The province of Carniola has no more beautiful spot than this vision of paradise!” These words were used by France Prešeren (1800-1849), Slovenia’s greatest poet, to describe the town of Bled .

For many years Bled has been known around the world for its natural beauty and historical monuments, such as the lake with its island, the church on the island with the wishing bell, and the castle on the cliff overlooking the lake, while other features unique to the area are the horse carriage “fijakarji” , and so are the boatmen who take visitors to the island on the traditional “pletnja”, and is Bled’s famous dessert “kremšnita”.

The first traces of human activity in Bled date from the Stone Age, and remains from the Early Iron Age were found under the castle, but the area was only settled to any great degree by the Slavs in the 9th and 10th centuries.

The first written mention of Bled is in the charter by which the German Emperor Henry II conferred the estate of Bled (Veldes) in Carniola on the Bishop of Brixen in April 1004. In 1011 he also gave them a walled Romanesque tower, the beginnings of today’s Bled Castle. A photocopy of the original charter from 1004 is kept in the castle museum, which also features the earliest history of Bled with the first excavations and shows the castle at different stages of its historical development.

In Lake Bled, which was formed by the retreat of the Bohinj glacier, there is an island with a church. The foundations of the pre-Romanesque chapel are probably the only example of a cult object from that period found in Slovenia. Written sources put the consecration of the first stone church as having taken place in 1142. The current design is from the 17th century, and an interesting feature is the wishing bell, made in 1534 in Padua. Among the first visitors to Bled were pilgrims who came to the island to worship the Virgin Mary, and the beginnings of mass tourism came in 1855, when the Swiss hydropath Arnold Rikli established a spa institute and baths.

To mark the 1000th anniversary of the first written mention of Bled , a celebration that is important not just to tourism in Bled, but to the promotion of the whole country, the Republic of Slovenia is issuing commemorative coins featuring a silhouette of the island and church and the castle heights.