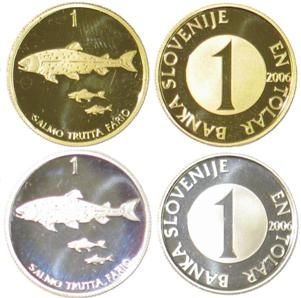 With the introduction of the euro in 15 January 2007 after the dual circulation period, the tolar will cease to be legal tender, having been designated by law as the sole legal tender in Slovenia on 8 October 1991.

The medals will have the same appearance as the 1-tolar general circulation coin, except that the Bank of Slovenia (“BANKA SLOVENIJE”) is the issuer, rather than the Republic of Slovenia (“Republika Slovenija”); the year of manufacture is given as “2006”.

The medals were designed by Miljenko Licul. The medals are being manufactured by Mincovna Kremnica š.p. in Slovakia.

* Item is no longer available